Preheat oven to 375 degrees. Season cut sides of squash with 1/4 teaspoon salt. Bake, cut sides down, on a baking sheet until tender, about 45 minutes. Let stand until cool enough to handle. Scrape flesh into strands using a fork. Let drain, covered to keep warm, in a colander set over a bowl.

Meanwhile, heat 1 teaspoon oil in a medium skillet over medium heat. Cook onion and garlic, stirring, until soft but not brown, 8 to 10 minutes. Add oregano; cook until fragrant, about 30 seconds. Divide mixture between 2 bowls.

Preheat the oven to 400 degrees F.

Chop off the top portion of the garlic head to reveal cloves. Peel any excess paper/skin off from the bulb of garlic. Pour about a teaspoon of olive oil on top the garlic cloves and cover with foil. Roast in a baking dish for 45 minutes, or until golden brown and soft. Allow to cool and then squeeze garlic out of the paper skin into a small bowl and mash well with a fork, set aside.

At the same time roast the squash. Slice the squash lengthwise and rub a drizzle of oil all over the cut side of both squash halves and sprinkle with salt and pepper.

Place cut side down on a baking sheet and bake about 30 to 45 minutes, or until the squash is just tender enough to scrape into strands. You want it to be barely tender, it will continue cooking later. Remove from the oven and scrape the squash into strands.

While the squash bakes make the sauce. In a large skillet, cook 1 tablespoon of olive oil and the pancetta over medium heat, stirring, until the pancetta is lightly browned, about 5 minutes. Add the onion, bay leaf, thyme and sage and cook, stirring until the veggies are softened, about 5 minutes. Push to the veggies to the side of the pan. Increase the heat to medium-high. Add 1 tablespoon olive oil to the center of the pan and crumble in the chicken sausage and cook without stirring for 3 minutes. Break up the meat and continue to cook, stirring occasionally until well browned, about 3 minutes.

Add the tomatoes, basil and 1 cup water to the skillet. Simmer, stirring occasionally until thickened, about 15-20 minutes. Once the sauce has thicken a bit, discard the bay leaf and season with salt and pepper. Remove from the heat and stir in the mashed garlic.

Meanwhile, in a medium saucepan, melt the butter over medium heat. Add the flour and cook, whisking constantly, for 1 minute. Whisk in the milk in a steady stream and simmer for 2 minutes, whisking throughout. Remove from the heat, stir in all of the provolone and season with nutmeg, salt and pepper. Let cool, stirring occasionally to prevent a skin from forming.

To assemble the boats, remove a little of the squash strands from each boat. Then place a layer of the meat sauce on top of the remaining strands, then a layer of the cheese sauce, then layer the removed squash strands on top of the cheese and divide the remaining meat sauce among the boats. Lastly, top with the remaining cheese sauce and shredded mozzarella cheese. Place the squash on a baking sheet and bake for 20-30 minutes at 350, or until the squash are warm throughout and the cheese is browning. Remove from the oven and let sit 5 minutes. Garnish with fresh sage, fried sage or basil.

Preheat oven to 375. Roast squash on a baking sheet for 50 minutes. Let cool another 30 minutes, then cut in half. Spoon out the seeds, then using a fork, scrape up the flesh, making the “spaghetti.” Isn’t that cute?

Heat oil in a medium skillet. Add the onion, garlic, jalapeno pepper and red bell pepper. Saute 2 minutes. Add cumin, Mexican oregano, chili powder and a good pinch of salt and pepper. Saute another minute. Add the beans, corn and cilantro. Stir to combine. Squeeze in the lime juice and give one last stir.

Add in half the “spaghetti” to the bean mixture and stir to combine. Taste and season accordingly. I probably tossed in a little more salt at this point.

Stuff each squash half with the mixture and top with grated cheese.

Stick it back under the broiler until the cheese melts and gets all brown and bubbly, baby.

Garnish with a little bit of cilantro 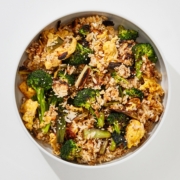 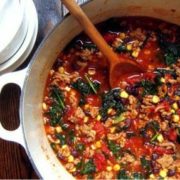