Preheat oven to 400 degrees. Pierce sweet potato several times with fork and roast about 45 minutes, or until soft. Allow to cool slightly–do not turn off oven. While potato is baking, heat oil in medium skillet over low heat. Add onion and dash of salt, and cook, stirring occasionally, for 30-40 minutes or until just caramelized. Add kale to skillet and cook until tender and wilted. Remove from heat and add salt and pepper to taste. Scoop insides of potato into medium bowl and mash; add milk, sage, and salt and combine until well-mixed and smooth. Spread mixture onto pizza crust. Top with half of cheese, kale and onions, and then remaining cheese. Bake pizza in oven at 400 degrees for about 10 minutes, or until kale begins to crisp and cheese melts. 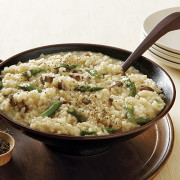 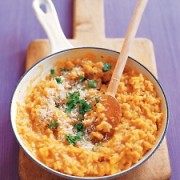 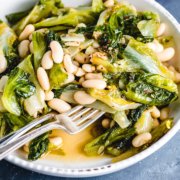 Escarole with White Beans and Parsley