Heat the oven to 375°. Put the potatoes in a pot of salted boiling water and boil for 15 minutes until soft. While the potatoes are cooking, peel the celery root (celeriac). Cut into 1⁄4″ slices. Put in a separate pot of salted boiling water and boil for 3 minutes, until slightly translucent. Drain, keeping some of the liquid and set aside. When the potatoes are cooked, take them out and rinse under cold water. Let cool. Peel skin and cut into 1⁄4″ slices. Set aside. In a small pot, heat oil. Fry the garlic for 10 seconds or so, until they are fragrant. Do not brown. Add the tomatoes. Lower to a simmer, cover and cook for 15 minutes. The tomatoes should become a sauce. Add half a cup of celeriac juice or cooking water to tomato sauce, then add the creme fraiche. Stir until well mixed.

Butter a medium sized gratin dish. Put a layer of sliced potatoes. Then a layer of celeriac slices. Add a layer of tomato sauce. Sprinkle with salt and pepper. Repeat the layering finishing with the grated cheese. Bake for 30 minutes. Serve piping hot. 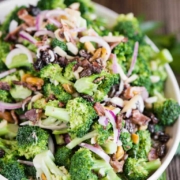 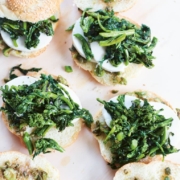 Braised Leg of Lamb with Garlic, Carrots and Potatoes