Preheat the oven to 350 degrees F. Add 1 tbsp. olive oil to a large sauté pan. Lay the bacon strips in the pan and bring the pan to a medium heat. Cook the bacon until browned and crisp. Drain the bacon on paper towels. DO NOT ditch the bacon fat. Reserve it for finishing the crostini. Toast the bread slices lightly on both sides in the oven. Remove the toast from the oven and arrange a thin layer of the sliced apples on each toast. Top the apples with the cheese and return the toasts to the oven. Bake the crostini until the cheese starts to melt and get bubbly, 5 to 7 minutes. Place 2 bacon strips on each crostino and return to the oven for 1 to 2 minutes. While the crostini are doing their final toast, heat the ½ of remaining bacon fat in the pan and whisk in the vinegar. Turn the heat off and toss in the arugula, season with salt and stir to coat the greens with the vinaigrette. Remove the crostini from the oven, cut the bread in half and then top with the wilted arugula. 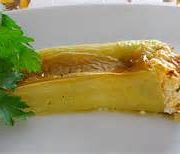 Chickpea, Barley and Zucchini Ribbon Salad with Mint and Feta

Macaroni and Cheese with Butternut Squash